Sylvia Plath in Devon: A Year's Turning: The Story of a Book 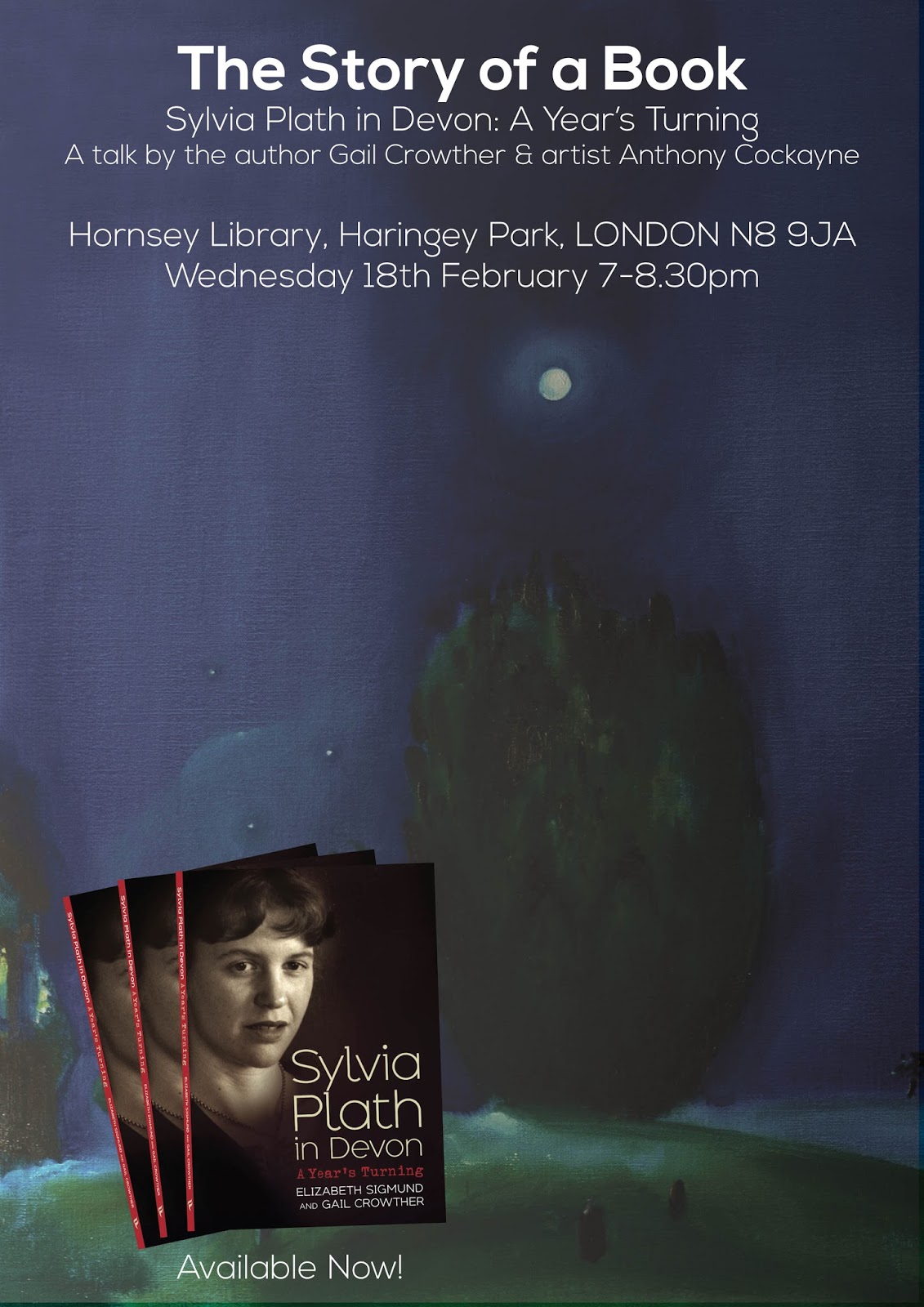 Gail Crowther and Anthony Cockayne will be speaking on Sylvia Plath in Devon: A Year's Turning in locations around England commencing on 18 February 2015 at the Hornsey Library.

The Story of a Book: Sylvia Plath in Devon: A Year's Turning
A talk by the author Gail Crowther and artist Anthony Cockayne

Additional talks are in the works for Cambridge, Cumbria, Manchester, and Plymouth.

In 2014, British artist Anthony Cockayne completed the oil painting "The Moon and the Yew Tree" that appears on the back cover of Sylvia Plath in Devon: A Year's Turning following a suggestion in 2013 by author Gail Crowther, proposing the idea. Cockayne had made a visit to the churchyard of St.Peters in North Tawton in 2012 and so had experience of the poem's setting and fascinatingly had read "The Moon and the Yew Tree" aloud, whilst close to the Yew, to two friends who had driven him there. The experience was incalculable during the creation of the painting. The original oil on linen painting measures 49cm x 49cm, taking its measurements from the lead in Hughes's poem "Fairy Tale " from Birthday Letters, when he states "Forty-nine was your magic number" (159). During the painting's development a further Hughes line and the very last in Birthday Letters had a considerable bearing on its look: "But the jewel you lost was blue" ("Red", 198). The intention was to restore the Blue in the painting.

A pigment print on Canson etching paper,is available in an edition of 49, the image size corresponding with the original work. An unframed print is available through contact at www.anthonycockayne.com. Price 200 GBP. Postage and Packing not included in the price.

A word about the book 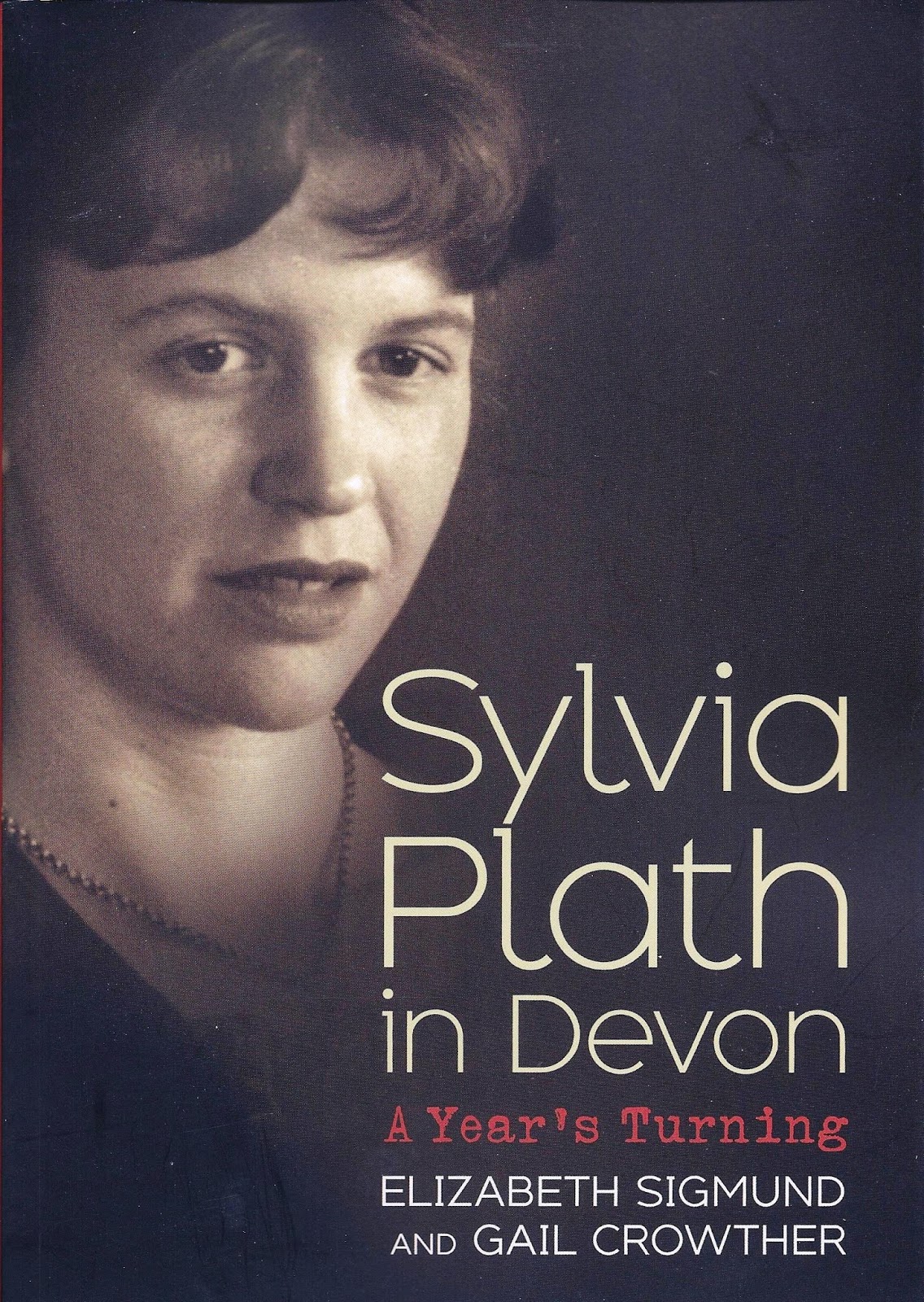 It is not my intention to review Elizabeth Sigmund and Gail Crowther's recent book Sylvia Plath in Devon: A Year's Turning (Fonthill Media, 2014). However, if parts of this post sound like a review it is merely coincidence. Having contributed the introduction "Writing Life" to the book and been a witness to it in all its stages -- from manuscript to proof to the printed form -- the book is in many ways too close. However, having said that, I do not think there is anything wrong with either commenting on Sylvia Plath in Devon or promoting it. And what better day to do it than today, 11 February 2015, the 52nd anniversary since Plath's death. A day to celebrate Plath's life, which Sylvia Plath in Devon does. Though some might say I am biased, I simply cannot recommend this book highly enough.

Sylvia Plath in Devon is written with care and compassion which is a direct reflection on the all-too brief but meaningful friendship between Elizabeth Sigmund (then Compton) and Sylvia Plath. The true nature of the friendship, and just how much it meant to Plath, is evident in the simple act of Plath famously turning to Elizabeth for comfort on the difficult day in July 1962 when Ted Hughes' infidelity was confirmed. Also in Plath dedicating her first novel The Bell Jar to Elizabeth and her then husband, the writer David Compton.

Elizabeth's memoir of Plath is a wonderful read, recalling many of their meetings. What is remarkable is how clear the memories are, how deeply ingrained they are in Elizabeth's being, how even after Plath's death she was a strong and vibrant presence in her life. As well, how Plath's life seemed to connect and intersect with Elizabeth's after Plath's death. These connections might have been illuminated had Plath lived, but I find it truly remarkable that they were made, sometimes decades after Plath's death. The cohesiveness transferred to Gail's full-length chapter on Plath's time in Devon from September 1961 to December 1962. Major works by Plath are discussed, and the narrative reads smoothly, as Gail expertly weaves together a thorough and compelling story of Plath's life and times. Drawn from a careful intertextual assessment of Plath's archives: letters, personal papers, working manuscripts for poetry, radio recordings and broadcasts, realia, and much more, Gail's chapter highlights what mattered most to Plath during this period: her writing, her family, culture, and the development of a country identity and presence.

Sylvia Plath in Devon assumes prior knowledge of Plath's life, of her first 29 years. When necessary, Gail dips both into pre-Devon life and also at Plath's death. It is not an easy book to read, very emotionally charged as the subject seems always to be. But rather than dwell on mistakes and pass judgement on the behavior of people now gone, Gail sticks solidly to Elizabeth's example of exuding tact. Elizabeth has an amazing soul and vivacity, her voice and laugh when I hear it keeps me on a high for days. And I can just imagine how easily Plath took her. As each chapter of Sylvia Plath in Devon: A Year's Turning was written, and as I worked on the introduction, I felt Elizabeth's strong presence as a guiding force; an unconscious and unstated dictum that this book be about nothing other than her friend Sylvia Plath and her achievements.

Buy it from Amazon.com, Amazon.co.uk, or Book Depository today!