Her yellow hair, which had been lightened several shades from its natural light brown, was shoulder length and had been carefully trained to dip with a precise and provocative flourish over her left eyebrow. Her eyes were very dark, deeply set under heavy lids that give them a brooding quality in many of her photographs. Her cheekbones were high and pronounced, their prominence exaggerated by the faint, irregular brown scar that was the only physical reminder of the suicide attempt.

It might be safe to say that everyone going to the Lilly Library at Indiana University wants to see and to touch the cutting's they have of Plath's hair. As such we pay attention to Plath's hair both in images of her as well as in its appearances in her creative writing. At least I do...do you? Some famous appearances are: "A rose of jeopardy flames in my hair" from "Circus in Three Rings"; "The wind gagging my mouth with my own blown hair" from "The Rabbit Catcher"; "Warm rain greases my hair, extinguishes nothing" from "Burning the Letters"; and "And dried plates with my own dense hair" from "Stings", to name only a few.

However, it is not the use of Plath's hair as prop-imagery in her poetry that this post concerns itself. No, it is the photographic images of Plath and her hair. In the Journals of Sylvia Plath (Faber) (The Unabridged Journals of Sylvia Plath (Anchor)), image 16 "SP in front of the President's House, Smith College, 1954" was accidentally reversed when it was published. Below is the image as it appears in the book.

Note the part in her hair-part in the image above is on the left side of her head with her hair descending down over the right side of her face. However, per Klein (and many images of Plath), Plath parted her hair on the right so that it swooped over the left side of her face (and could cover her left eye and the scar she got from her first suicide attempt, for which I am told there is a charge to see). Also, the angle of the President's House is all wrong in the above image and believe me, I have traipsed all over this part of Smith's campus trying to find the angle: it doesn't exist. The original image is held in the Sophia Smith Collection at Smith Collection. Below is a composite image with the incorrect image on the left and the correct one on the right.

Try covering up the one on the left. Do you agree, maybe, that Plath looks more "normal" or more like herself in the image on the right? From "Three Women": "The mirror gives back a woman without deformity."

Noticing this, I started looking at other images of Sylvia Plath, to see how many others might have been accidentally printed in reverse. You might be surprised...I certainly was. Unfortunately, many of the images printed in association with Andrew Wilson's brilliant Mad Girl's Love Song were accidentally flipped in the images that accompanied pre-publication articles and excerpts. This is no fault of Wilson's, obviously. It is most evident looking at the covers of Wilson's book and Carl Rollyson's American Isis: The Art and Life of Sylvia Plath. In Carl's book the part is clearly on the right side of Plath's head; and in Wilson's on the left. 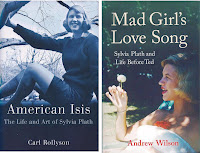 Here are some of images below, composited together. In each case, the incorrect image is on the left and the correct one on the right.

How does this affect (or not affect) our vision or image of Sylvia Plath? As in, the way that we view her? Does it? I do think it changes the way Plath looks; there is something unsettling or discomforting about those printed in reverse. Of course this is how Plath would have see herself in a mirror. We know that mirror images were important to Plath and her poetics. She told us: "Mirrors can kill and talk, they are terrible rooms". Even in working on this post, I feel there to be "A disturbance in mirrors" which leaves me only to say: "Destroy your mirror and avoid mishaps." Now: "The mirrors are sheeted."
Andrew Wilson Archives Carl Rollyson Indiana University Lilly Library Mortimer Rare Book Room Photographs Smith College Sylvia Plath Unabridged Journals