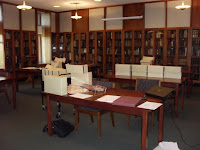 As Peter and I note in the opening pages of our new book These Ghostly Archives: The Unearthing of Sylvia Plath, archives are not only magical places, they are places of power and politics too. And the power seems to operate in a number of different ways: the experiential power of holding original documents, the power and privilege to study in an archive, and the power behind who gets to have an archive of work in the first place. Much is about access and opportunity. Often we speak of ‘the archive’ as though it were some kind of monolithic, static space. Yet what we discovered as we worked on a series of papers between 2009-2013, and subsequently on our book, is that archives are far from fixed. They are diverse, living, animated spaces that constantly invite shifting perception. We can visit the same archive two, three or four times and find something different on each occasion. Plus archives grow all of the time and new material becomes available. In our book we challenge the notion of the fixed archive by arguing that archives are dynamic, and that this dynamism can seep beyond the walls of what might be called the ‘traditional’ archive into the ‘living’ archive, where history and stories leave their blueprint on the spaces around us.

The first archive I visited was the BBC Written Archives Centre in Reading, England. Peter had asked me to look at some material on his behalf. We had already exchanged emails about Peter’s archival work, particularly at Smith College, which holds one of the largest Plath collections in the world. Peter had shared his enthusiasm for handling the Ariel poem manuscripts and early drafts of The Bell Jar, as well as personal possessions such as pieces of painted furniture, trinkets, and correspondence. While I was aware that Peter was an archivist by profession, I could also tell that there was something different going on with his engagement with Plath material. I didn’t know at this stage about ‘archive fever’ or how when you work with materials in an archive, time dissolves around you.

Over the coming years we worked separately (but on each other’s behalf) in a number of different archives – and only once on a joint trip to Smith College in the summer of 2011. The nature of these visits changed as we realised we could utilise the fast-paced technology that was developing. In 2008 we would email each other as soon as the archive visit was over, type up notes, and send on as soon as possible. Today, we can WhatsApp while we are actually in the archive and, if allowed, take photographs and share documents with an immediacy that often makes me feel I am there, albeit virtually. This immediacy can be helpful if we stumble across an ethical issue, or if we make an exciting find that we cannot wait to share. Both of these scenarios we discuss in our book, in particular decisions that have to be made regarding whether to publish certain things or not. We tend to err on the side of caution, especially if stories involve other people who are still alive. The archive can be a place of exposure and sometimes people get drawn into a story via secondary sources when they have personally chosen to keep their silence. 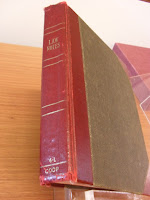 And silence of course, oddly, is another feature of the archive. Although they teem with stories, there are maddening gaps too. Fragmented correspondence, missing pages, references to letters, poems, prose that no longer exist. In Plath’s case, a whole ‘missing’ novel manuscript and two ‘missing’ journals, two torn out pages from her 1962 wall calendar, and even torn out pages from the journals do that survive. The silence can jolt you from a smooth-running narrative into confusion and speculation. But this silence also invites further study; when something is missing, can it be found? This forms the basis for the first chapter in our book where we follow the trail of a missing manuscript, the final piece of prose that Plath wrote before her death, which was stolen from the BBC shortly afterwards.

Missing archives, lost archives, in many ways are the mostly ghostly of all – certainly elusive, but still holding out promise. And that in many ways is the power of the archive – the story is never fully told and it is a story that we may one day know, or not.

These Ghostly Archives: The Unearthing of Sylvia Plath by Gail Crowther and Peter K. Steinberg is now available. Published by Fonthill Media, the book is available online via the publisher, Amazon.co.uk, Book Depository,  and other websites.

These Ghostly Archives will be published in the United States on 3 October 2017.