Thursday, July 02, 2020
The second picture postcard Sylvia Plath sent to her mother from France, which is also the second to last one she sent that we know about, depicted "LE MONT SAINT-MICHEL (Manche) Ensemble Sud par Grande Marée." 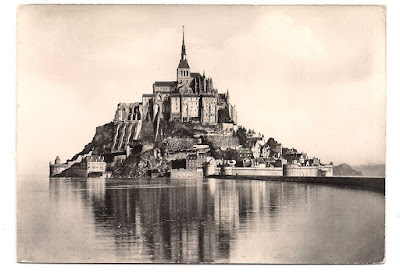 Dated Sunday, 2 July 1961, the postmark was illegible because the cancellation stamp mostly did not cover the postage stamp. Thus, it is unclear on which day it was sent. It was published by Service Commercial Monuments Historiques Grand Palais -- Avenue Alexandre III -- Paris. The stamp was .50 Francs and depicted Tlemcen Grande Mosque. I believe it may have been designed by Pheulpin. The postcard is numbered "2" in pencil in the top right, just to the left of the stamp.

Plath reports they are at a "crêperie” in Douarnenez. Oddly, she spelled Frieda's name wrong, which is something I checked and re-checked dozens of times during the project.  Aurelia Plath annotated the postcard, translating "Grande Marée" into English, "high tide".

Plath reports they expected to be to the Merwins by the 5th of July and reminds her mother about her Living Poet programme on the BBC on Saturday the 8th. 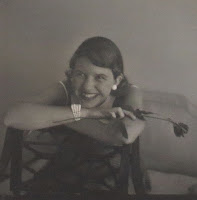