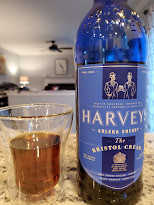 Last September I was reading some of Sylvia Plath's letters and journals, I started to notice a little leitmotif as I was hoping around. And that motif was sherry drinking. She famously wrote about drinking George Tyrer's sherry in a journal entry that was a part of her North Tawton and Devon dossier of neighbors and acquaintances: "George called out from the bedroom to give me some sherry. I asked the name of the sherry it was so good: Harvey's Bristol Milk." Plath and Sherry was also discussed at the Plath birthday shindig hosted by the Sylvia Plath Society by Trish Grisafi, author of a forthcoming book Breaking Down Plath (Wiley).
I cannot find Harveys Bristol Milk in my area, so I found the next best thing(?) in their Harveys Bristol Cream (pictured right).
It is a decent digestif but is not as good as port in my humble opinion. I have seen some 1950s bottles of Bristol Milk for sale via auction, but at the prices they realize, I am fine drinking the modern stuff.
I am not quite sure, but I think Plath mentions sherry in her journals and letters more than any other alcohol. In her journals, "sherry" is mentioned by name thirteen times. Her letters are trickier as one summer at the Vineyard Sailing Camp she went by the name "Sherry." Perhaps it was a self-fulfilling prophecy, in some ways: You are what you drink? You drink what you are? In volume one of the Letters, she writes the beverage "sherry" 55 times. In volume two, she mentions it just eleven times. Some of Plath's characters in her prose also consume the beverage ("The Wishing Box", "Stone Boy With Dolphin", "Cambridge Letter", "B and K at the Claridge", and "The Smoky Blue Piano", to name a few).

Let us look at some of the more interesting times Sylvia Plath drank sherry.
In journal entry 152, which was undated but written 20 September 1952, Plath had sherry in the backyard of Wilbury Crockett's house and he planted the seed of graduate school in England in her.
A few years later, as a graduate student in Cambridge, Plath wrote on 21 February 1956,

And I drink sherry and wine by myself because I like it and I get the sensuous feeling of indulgence I do when I eat salted nuts or cheese: luxury, bliss, erotic-tinged. I suppose if I gave myself the chance I could be an alcoholic.

She drank sherry with Cyrilly Abels, Betsey Talbot Blackwell, Olive Higgins Prouty, Stephen Spender twice, T. S. Eliot, and, naturally, Ted Hughes, among others. She once drank sherry and talked about Dylan Thomas. Plath drank sherry in Bard Hall of Columbia overlooking the Hudson River at night.
Once, visiting her thesis advisor George Gibian, Plath wrote to her quasi-boyfriend that "(after five glasses of sherry I felt an overwhelming impulse to strip and nurse them myself!)" So, please drink in moderation lest you spontaneously start nursing nearby infants.
As thanks to Mrs, Morton, the upstairs attic-living neighbor in Chalcot Square, Plath and Hughes intended to leave her a bottle of sherry now and than in gratitude for letting Hughes use her flat as a writing space.

Later in her marriage, after Ted Hughes began his affair, she suggested that there ways Plath could save money, such as, "by not drinking sherry, smoking, eating expensive meat & that the children could learn to 'live like the people'." Because I will largely be drinking cheap sherry (and port) I hope that Ted Hughes will be pleased with my economizing.
Here is a nice old advert for Harveys Bristol Milk. Harveys is the only brand name Plath mentions in her journals and letters. Plath does mention sherry in a number of her stories. She does not mention sherry by name in her Collected Poems.
All links accessed 7 September 2020 and 20 January 2021.
Letters of Sylvia Plath Sylvia Plath Unabridged Journals

I too am a sherry drinker - partial to Tio Pepe, Spanish sherry.
Cheers, Judy Raymo

Weaselmaster Al said…
Sherry would not have been a good choice with the antidepressants she was taking in her last week(s).
23 January, 2021 17:01 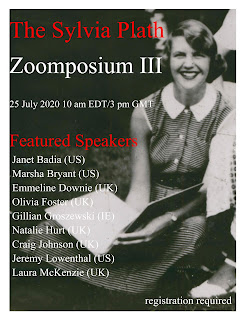