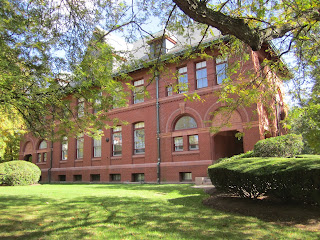 Sylvia Plath graduated from the Alice L. Phillips Junior High School in Wellesley in June 1947. She was a regular contributor to the school's magazine The Phillipian, appearing in eleven issues during her years there:

Most of the poems and pieces I have copies of, as I have worked in archives with the original magazines for most of them (or clippings that Plath herself retained). However, the June 1947 issue was partly elusive. Her poem "May", appearing on page 26, was clipped by Plath and now resides in an archive. But her "Class Poem", which was published on page 11 of the same issue, does not seem to exist and I have been looking for it for about twenty years. I have photocopies of, I believe, all of Sylvia Plath's published poems except for this one.  It is rather curious that Plath chose to retain "May" for posterity, but not her "Class Poem". 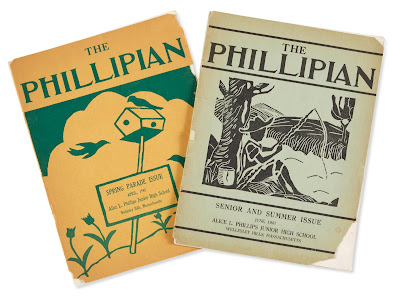 After contacting Bonhams to see if the poem was included, a kind man from there wrote back to say that the "Class Poem" was not included as it is one of the pages that is missing.
The marvelous thing about the June 1947 issue is that it also serves as a school yearbook and includes pictures and texts about the pupils. Plath is there, as is Arden Tapley, whom Plath drew, and Mary Ventura, a name we are all familiar with as we traveled with her to the Ninth Kingdom in Plath's short story which was published in early 2019.  So are some early boyfriends or interests. Plath's picture, which I think is new to me, appears on page 9. Tapley and Ventura appear on page 26 (with "Class Poem"). Because there is no mention of Plath's yearbook photograph in the Bonhams listing, then it is likely that page is gone as well.

"Class Poem" is three, eight-line stanzas. She wrote it on 14 May 1947 and called it in her diary "that awful class poem". The next day she submitted it to Miss Lawson who accepted it, leading Plath to express joy in her diary, while also deriding, again, the effort: "I am so glad to get rid of it...." So, I think the question about why a copy of the poem is not a part of Plath's archive is evident from these comments. That same day, the 15th of May, she wrote her poem "May", a poem with which she was pleased: "Slender, silver birches clad in plumes of misty green...." Plath had birch trees in her yard in Wellesley, and they feature in some photographs of her.

The first lines of each stanza of "Class Poem" are: "At last the time has come to say, 'Goodbye,'"; "We've reached the Halfway House along the way,"; and "Now, in the ling'ring moments just before we go,".  The final lines of the poem are: "The lessons learned, the friendships made, / Which in new soil will blossom once again."

My most sincere thanks to Taylor Kolloch at the Wellesley Historical Society for supplying a copy of the the poem and yearbook photographs from the June 1947 issue of The Phillipian.