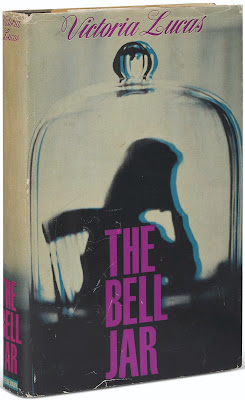 Christie's New York had an online auction that ended Friday, 17 September 2021, of a nice looking copy of the 1963 Heinemann edition The Bell Jar with Victoria Lucas as author.

In the auction of "The Exceptional Literature Collection of Theodore B. Baum: Part Two, the copy was Lot 355. Theodore B. Baum (1935-    ) is an American cable television company executive.

The details from the auction are:

"First edition of Plath's thinly veiled autobiography published in England pseudonymously a month before her February 1963 death. Plath had returned to London with her two young children during the brutally cold winter of 1962, renting a flat at 23 Fitzroy Road (an address once inhabited by William Butler Yeats). Though that autumn had been a period of intense activity as she produced the poems that would comprise Ariel, depression nonetheless overtook her. The Bell Jar, her only novel, did not appear under her own name until 1967 and, in accordance with the wishes of her mother and Ted Hughes, was not published in the United States until 1971.

"Please note this lot is the property of a private individual."

The book was estimated at $3,000-$5,000. It sold for just a bit more: $16,250, which includes the buyer's premium.  This is a very high price and while the copy is exceptionally nice looking, it might have gone for this price because at the time of writing there are no copies listed on ABEbooks.com or other rare book websites.

I have not kept track of what this book sells for historically at auction, but it might be an auction record for a copy not sold by Frieda Hughes. Those copies, naturally, are in a different stratosphere, to an extent.

Read more in this article that appeared on Fine Books & Collections.