As Sylvia Plath and Ted Hughes wended their way back to Massachusetts from their counter-clockwise trip across the continent of North America, one of their final stops before reaching Wellesley was to visit Uncle Frank and Aunt Louise Bowman Schober.

After they married in Winthrop in June 1942, the Schobers found themselves in Ohio for a spell before returning east. They settled in the university town of Villanova, outside of Philadelphia. The wedding photograph, right, was taken in front of the Bowman house at 27 Thornton Street, Winthrop.

Plath and Hughes had traveled somewhat hurriedly through the south after they stayed a few days with her Aunt Frieda Heinrichs, zooming through New Mexico (Carlsbad Caverns), Texas, Louisiana (New Orleans), Mississippi, Tennessee (Sewanee), Virginia, Washington, D.C., and Pennsylvania (Villanova). Please do read the Volume II of the Letters of Sylvia Plath as well as David Trinidad's wonderful essay, "On the Road with Sylvia and Ted." Plath and Hughes were in Pennsylvania circa 25-27 August 1959.

On a road trip earlier this year to visit some family, I had the opportunity to deviate, without too much inconvenience, to see the house that they visited. It sits in a nice suburban area not too far from Route 476, which was not there in 1959.

The house is at 632 Spruce Lane, according to Plath's address book which is housed at Smith College. 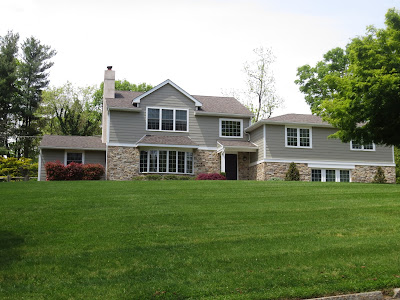 The house was likely modified and enlarged from when Plath & Hughes saw it.