One of the most memorable days during the years-long process of editing The Letters of Sylvia Plath was the day that copies of 16 letters to Ted Hughes and 18 letters to Edith and William Hughes, his parents, arrived at my doorstep. I vaguely knew they were coming but that hardly actually prepares one to see an envelope, with my name written on it in Frieda Hughes' distinctive hand, appearing in the mailbox at the end of the driveway. I pulled it out of mailbox gingerly, like it was the most fragile object in the world. When I opened it, I'm pretty sure I squeaked. Truly.

The black and white photocopies provided enough information about the letters to make transcription possible. There were a smattering of copies of envelopes included, some of which belonged to letters not included in the bounty of stuff Frieda sent. Which begs the eternal question: where are the letters that were stuffed into these envelopes? Who wrote it? Plath? Hughes? Both? And what would their Hollywood portmanteau be: Plaghes? Huglath? Plathughes?? For example, there was an envelope postmarked 20 November 1956 from Cambridge to Hughes' parents. This likely was a letter about Olwyn Hughes' recent visit to Cambridge, when she took the famous series of photographs of Sylvia Plath in front of the bookcase at 55 Eltisley Avenue. 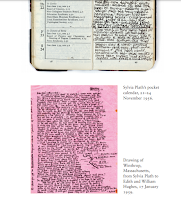 Since Sotheby's put up full color scans of the letters on their website, I have been periodically reading them in all their full glory. I knew the letter to Edith and William Hughes from 17 January 1959 was on pink paper as I asked Frieda for a color scan of that for the plate section in Volume II. But the range of other colors of paper (blue, gray, green, and, of course, cream/white, and whatever the hell color you call that 31 March 1959 paper was written on---possibly the paper color inspired Max Nix's mustard yellow outfit in Plath's The It-Doesn't-Matter Suit, completed later that year) was a revelation. And it is lovely to see the letterhead for the Queen Elizabeth ship and lovely blue Newnham College crest on the letters to Ted Hughes. Recently, I read Lot 31, Plath's 1 July 1958 letter to Edith and William Hughes. Plath writes of the "sultry summer", which is a phrase she would revive three years later as the opening line to The Bell Jar. She writes in the letter of their poetry acceptances and payments, and of a hiking excursion that was---on a previous trip---the raw material for the poem and story both titled "Above the Oxbow" as well as the poem "Incommunicado". There is a mention, to of the Boston apartment to which she and Hughes would shortly move. There is a corresponding journal entry that day and the two read together just enrich the Plathian experience. Especially so if you are lucky enough, as I have been, to visit the sites and see them with my own eyes.

I saw I didn't know how pictures were sold and ... I went to ask Mr. Hickson, for I thought he at least would know the business part. But he repeated my question: "What is the value of a picture, my dear Sara, nobody knows, not even the dealers. A picture has a value. The price is anything you can get—but the value is a mystery, like all things of the spirit." Joyce Cary, Herself Surprised, New York: NYRB, 1999, 137

Many of the letters from Sylvia Plath to Ted Hughes, as well as Lot 41, at the Sotheby's auction went to Jonkers Rare Books, a firm with wonderful staff, stock, and a sincere interest and respect for Plath. I could not be happier knowing this. It is a business, but I look at Jonkers as I do a collector or even a library: while the material is with them, it will be cherished and in the best possible hands. Jonkers has recently issued a catalog of items for sale. Splendidly wonderful, detailed work, and an absolutely beautiful production. 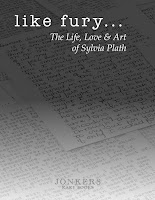 Tom Ayling at Jonkers recently published a beautiful catalog of items for sale called like fury... The Life, Love, & Art of Sylvia Plath. Tom kindly let me know that based on his analysis in working with the original letters the company bought at auction, that two letters to Ted Hughes in Volume 1 have been inadvertently mixed. That is, the black and white copies I worked with in 2015 were mixed up. Tom's advantage of working with the originals, was that he could match-up the fold lines of the papers, and he concluded indisputably, that two of the letters were have some content switched. This is a good reminder to try to work with original materials as much as possible!

The two are: 16 October 1956 (Lot 14, sold by Jonkers already) and 17 October 1956 (Lot 15, item 4 in the catalog). Basically the second leaf for each letter, on which is typewritten pages 3 and 4 of each respective letter, belongs with the other letter.

I am so, so so, so sorry about this mix-up confusion. And I am so very grateful to Tom to reaching out to me to let me know of the issue. Naturally I am embarrassed and feel badly, but I am grateful to know and to be able to share the information with you.