The history of the gravestone of Sylvia Plath is tumultuous. On 30 April 1963, just over two months after Plath's death, Aurelia Schober Plath, the poet's mother, received a letter from Hilda Farrar, an aunt of Ted Hughes'.

Mrs. Plath routinely annotated her letters with thoughts about the correspondent, ideas for replies, and, as well, comments intended solely for her eyes. Her notations were made in something resembling cycles: both upon receipt and as well through re-readings over the years. Many were made, also, as she prepared her daughter's correspondence for publication in Letters Home (1975), and when she surveyed her daughters' papers—and part of her own archive—for sale to the Lilly Library (1977).

In the letter cited above, Hilda wrote: "Billie [Ted Hughes' father] and I went to look at Sylvia's grave last week and he tidied it up as best he could. It appears it is unwise to put up a headstone for some months until the ground has had time to settle, but in the meantime we will plant some flowers and make it look cared for."

"Seven years!" suggests that Ted Hughes finally installed a headstone for Sylvia Plath in 1970. By this year, Hughes was preparing commercial volumes of Plath's poems (Crossing the Water and Winter Trees), numerous limited edition private press works, and an American edition of The Bell Jar (1971). His mistress and their child were deceased. As was his mother. In 1970, Ted Hughes also remarried. So the onus for erecting a permanent marker for his first wife's grave may have been borne out of the realization visitors and pilgrims would be arriving, and soon.

By the mid-to-late 1980s, Plath's somewhat fresh headstone made headlines all over the world when it became a site of routine vandalizing (defacement of the surname HUGHES). A major row cropped up in 1989 when two fans attempted to pay their respects to Plath only to find her grave unmarked. In a letter to The Guardian published on 7 April 1989, Julie Parnaby and Rachel Wingfield expressed justifiable indignation and disappointment that headstone should be so long ("a couple of years") in being replaced and that even with the threat of more vandalism, it should "be looked after and tended, both as respect to her as an individual, and also as recognition of her as one of the most important woman poets" of the 20th century. They reported that the vandalizer was a "feminist who objected to the imposition of Hughes as Plath's surname."

The Vicar of Heptonstall, John Harrison, wrote to "set the record straight" and said that the grave was defaced three times—with an attempted fourth—over an 18-month period. Harrison said that Ted Hughes had the stone fixed "promptly" after the first two. He concluded: "Whatever the rights and wrongs of various causes, I would hate to think that any[one] would condone such attacks on graves. It is surely an insult to the dead to use their memorials as a means of political expression..." The war of words extended from The Guardian into a rival London paper, The Independent, where one helpful Scotsman suggested Hughes modifying the wording to read "Sylvia Plath, wife of Ted Hughes." Another argued that Hughes himself might "RIP" if he just changed the lettering to "Sylvia Plath." Plath's headstone was replaced within three weeks with taunting headlines such as "Sylvia Plath's headstone, with married name, back at grave" (The Spokesman-Review).

Since then there have been pockets of renewed desecration of the marker for Plath's final resting place. In 2002, four years after Ted Hughes passed away, a Sylvia Plath biopic was announced which lead the locals of Heptonstall to fear revived "attacks on grave." Fortunately, it appears the film did not lead immediately to a rise in gravesite assaults.

In 2016, the grave was graffitied with pink chalk declaring love for Plath which sank deep into the stone. Over the last years, the letters HUGHES, embossed in black, have once again been scraped off in an attempt to erase the name.

Here are some examples of the defacement:

And then on 21 August 2021, Lambeth Walker recorded the pristine HUGHES and on the 24th, three days later, Paul Rowlands captured an initial attempt to re-vandalize Plath's married surname. 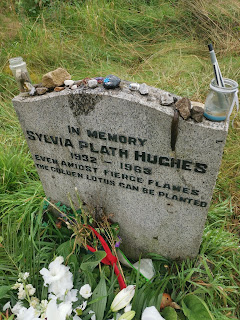 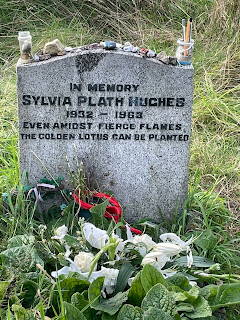 The HUGHES on Plath's gravestone was replaced, again, sometime in 2020 or early 2021. However, recently the H has started to be scratched away...again. If you search Twitter for "plath grave" or "Plath Heptonstall" you can see the "progress" these assholes are making in once more defling Plath's final resting place.

The person or the people responsible for the repeated defacement of Sylvia Plath's grave are cultural terrorists. They are misguided in that they seem to believe that they are perhaps "saving" Plath from Hughes. There might still be the concern over the "imposition of Hughes on Plath's surname." However, it is important to remember that "Sylvia Plath Hughes" was her legal name when she died and Hughes had every right to include it on the headstone. Whoever is doing this is, simply, desecrating the final resting place of a writer and of a person that he/she/they pretend to love and admire. And so, in fact, they are doing and showing the opposite of respect.