On the first of this year, I was going through some paperwork and computer files for a book-in-progress (more about this in my Year in Review post in December), and I stumbled upon two poems Sylvia Plath published towards the end of her sophomore year at Smith College. I tweeted about it, drafted this blog post, and then forgot all about posting it because other things made it up on the blog first. 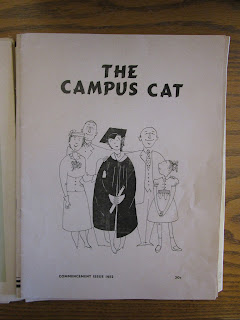 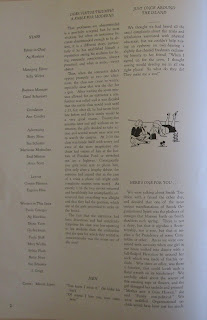 I knew as far back as 2015 that Plath had published something in the Commencement, 1952, issue of Campus Cat, but the humor magazine lists contributors but anonymizes the work therein by not including by-lines. Campus Cat does not appear in Plath's hand on extant typescripts of the poems that I have seen...but it is certain I have not seen all of Plath's typescripts...so this might not be news to some...

On page 1 of the issue, Plath's poem "Virus TV: (We Don't Have a Set Either)" appears under the title "T.V. Or Not T.V.", and there is a prose paragraph introducing it. On page 3 of the same issue appears "Be Mine – For Now", which in typescript is Plath's "Valentine: Lines for a Rich Bachelor", also with a brief introduction.