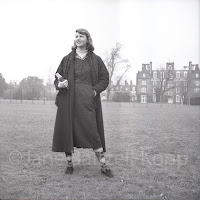 Get your new year off to a Plath-filled start with scholar and Plath aficionado, Dr Maeve O'Brien who is running a six-week online course all about Sylvia Plath, starting 13th January 2022!

Maeve's credentials speak for themselves – she wrote her PhD (2017) on Plath, has published many articles on this subject and is also co-editor of the forthcoming Bloomsbury Handbook to Sylvia Plath. But really - Maeve is also just a massive fangirl who loves the work of Plath and has had the opportunity to spend a lot of time with her words, visit her archives and see the places she's lived.

This course is borne out of a love for Sylvia Plath and Maeve's belief in feminist community learning – you do not need to have an academic knowledge of Sylvia Plath: you just have to have an interest and show up! Join a global classroom and meet people from all over the world who want to learn more about our favourite poet!

What you get:
· Full course price £85.00 sterling.
· Six weeks of live Zoom sessions - with each comprising of 1hr lecture and 1hr discussion.
· Chatty, informal style of sessions where we will all get to know each other and have a laugh as well as learn a lot about Plath.
· Folder of learning materials / course syllabus.
· Private discord channel to keep in touch with each other during the week.
· There are scholarships available for BIPOC - just send me an email!

The six-week course outline is as follows:

We will explore Plath's upbringing and take a look at her early poetry and fiction writing as well as her summer working as an intern for Mademoiselle Magazine in NYC. We will also touch on Plath's suicide attempt in the summer of 1953 and get a sense of the healthcare she received afterwards. We will wrap up this session with a look at Plath's "platinum summer" of 1954 and her successful admittance to Cambridge.

Week 2: Cambridge University - travelling through Europe and falling in lust.

This session will take a close look at Plath's experience living in England and attending Cambridge University. We will look at some of her literary criticism through essays written for her masters degree, the "boys club" of English poetry, her travels through Europe and meeting and marrying Ted Hughes.

The immediate years after Plath's marriage in 1956 forms the focus of this session and we will look at how Plath's writing process suffered during this time period due to writer's block. A cross-country road trip through the US, teaching at Smith and living in Boston will also be explored.

Moving back to England with her husband, we will spend this session considering how Plath wrote about pregnancy and miscarriage both in her poetry and fiction writing as well as in her own journals. Plath's time in London in the early 1960s saw her become politicised and active in the Campaign for Nuclear Disarmament - we will look at these lesser known moments of Plath's life during this period.

And then everything unravelled. This session will look at Plath's move to Devon, the disintegration of her marriage, her rage, and how she anticipated the second-wave feminist movement in her writing. We will look at the sheer GRIT and DETERMINATION that saw Plath write the poems that made her name despite so many barriers in her way. We will also study Plath's move back to London and her death by suicide in 1963.

We will look into life after Plath - how her words and work were changed by her editor and husband (whom she was separated from at the time of her death). This session will help us understand how Plath's legacy has been shaped by her editor, feminists and fans - and yet, we will see that despite everything, the words endure.