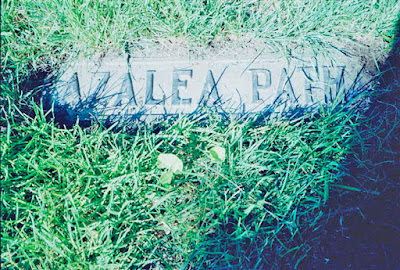 Azalea Path is one of the more famous "addresses" in the life and oeuvre of Sylvia Plath and it does not house a house at all. Rather, it is the cemetery avenue in which her father, Otto Emil Plath, was laid to rest.

Otto Plath immigrated to the United States from Germany in 1900 at the age of 15 years old. He settled eventually in Massachusetts, marrying his wife Aurelia Schober Plath, in January 1932. After the birth of a daughter, Sylvia, in 1932, and a son, Warren, in 1935, the Plaths elected to move. They selected Winthrop, a peninsula just north and east of Boston, strategically as it was the town in which his wife grew up and her parents still lived there.

As the 1930s came to a close, Otto Plath's health began to decline. He passed away on November 5, 1940, of an embolism in his lung after being diagnosed with diabetes mellitus and having a gangrenous left leg mostly amputated. His funeral service was held at the Reynolds Funeral Home on November 9 and he was interred at Winthrop Cemetery. The two young Plath children did not attend the service or burial.

The family moved to Wellesley in October 1942 and Plath herself undertook many visits to the seaside town throughout the 1940s visiting her friends and attended a funeral (June 1954) and a wedding (June 1955) there. However, it is unknown when Sylvia Plath visited her father's grave for the first time. In June 1958, Plath wrote that the town of Winthrop itself, and its name, was a talisman, and hoped to visit it that summer.

In January 1959, Plath and her husband lived at 9 Willow Street in Boston and Plath made "fruitful visits" to Winthrop (Journals 477). She wrote to her in-laws that they visited the town "& walked for miles" (The Letters of Sylvia Plath Vol II 291). On Monday March 9, 1959, Plath wrote of a "clear blue day in Winthrop" (Journals 473). In this journal entry, she writes explicitly about visiting the gravesite of her father for the first time. She recorded, "Went to my father's grave, a very depressing site…ugly crude block stones, headstones together, as if the dead were sleeping head to head in a poorhouse…I found the flat stone…right beside the path, where it would be walked over. Felt cheated….Left shortly. It is good to have the place in mind" (473).

This momentous occasion is an example where Plath's lived experience reappears in her creative works, namely the poem "Electra on Azalea Path" and a scene in The Bell Jar. In the poem, written shortly after the journal entry, Plath wrote "In this charity ward, this poorhouse, where the dead / Crowd foot to foot, head to head, no flower / Breaks the soil. This is Azalea Path" (Collected Poems 117).

Winthrop Cemetery's original layout occupies two distinct blocks near the town center. However, the town needed additional space and a third parcel of land opened in June 1940, making Plath among the first residents in "a cramped necropolis" (Collected Poems 117). The rows of graves have names which represent bushes and shrubs and trees such as elm, linden, and azalea path.

I lived in Winthrop for about four years but visited it numerous times before and after. I regularly gave tours to visiting scholars, friends, and even Hollywood film stars. Armed with Plath's poems, journals, and novel, we walked from the Methodist Church, down an alley and into the top, oldest part of the cemetery. Often I read from Chapter 13 in The Bell Jar as we strolled down the hill and across two streets, so that we could be with Esther Greenwood as she sought to find her father's grave. I speak Esther's "I could not find my father anywhere" as we crossed River Road to enter the lower cemetery by an iron fence (The Bell Jar 176). Across the threshold of the fence, we walk about ten or fifteen feet at which point I stop dead and read:

"Then I saw my father's gravestone.

"It was crowded right up by another gravestone, head to head, the way people are crowded in a charity ward when there isn't enough space. The stone was of a mottled pink marble, like canned salmon, and all there was on it was my father's name and, under it, two dates, separated by a little dash." (177) 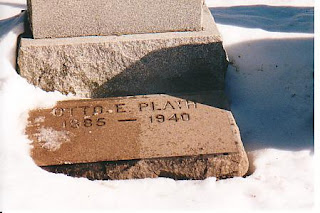 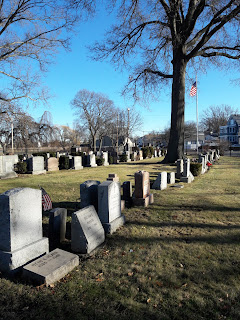 It might be dramatic, but it was effective in bringing Plath's texts to life forty to fifty years after she lived and experienced them.

Over the years, the marker for Azalea Path was covered regularly by dirt and grass growing over it. I frequently cleared the growth back, exposing the iron marker (enclosed in some concrete) to the sun. But I moved away, and my visits grew infrequent.