June 15, 2022
Because I had a rare moment of prescience in 2017, I saved all the web material related to Ken Lopez's failed attempt to sell Harriet Rosenstein's archive. Having access to the shoddy inventory proved useful. In fact, it was a source of hours of conversation and speculation with David Trinidad between 2017 and the archives opening at Emory in January 2020.

In particular, the folder of Elizabeth Sigmund's papers were of interest. On the day the photographer I hired took pictures of the Sigmund folder, the much dreamed about and discussed files became a reality. That is, until the syncing up problems happened.

This is what Lopez wrote:

One of the joys I took in receiving the files from the entire collection once it was made available was in figuring out what all this cryptic stuff was all about, including reading the interview notes and letters and other miscellaneous materials. Turns out the letters from Ted Hughes were to Elizabeth AND David; but I guess Lopez did not think David Compton counted? And, by the way, Elizabeth's surname was not hyphenated.

Peter Grogan, who bought the collection off Lopez and then sold it to Emory, provided a great summary of the content of Elizabeth's folder (and of nearly everyone else, for that matter). But his tally of letters differs from Lopez's. Grogan's cataloging acknowledged two letters from Elizabeth to Harriet Rosenstein; two copies of letters from Plath to Elizabeth; six letters from Ted Hughes; two letters from Aurelia  Schober Plath; and one letter from Assia Wevill (unstated, but it was to Plath).

So it mostly matches with the Lopez inventory except for one glaring omission: the original letter (second in Lopez's list above) from Hughes and Plath. (For what it is worth, the date Lopez gave was wrong. Based on Plath's Letts Diary and other letters, it is most likely date-able to circa 15 June 1962. He was close.) Lopez included an image of the letter which has appeared previously in this blog. Here it is again... 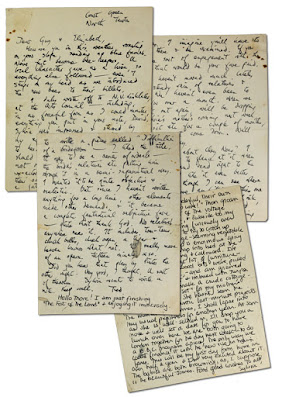 This letter was one of a number of items---including a dozen or so original prints of photographs of Plath and her children taken by Susan O'Neill-Roe, amongst others---pulled out of Rosenstein's papers and sold separately to a private collector. It is my hope that a copy might be obtained for any future edition of The Letters of Sylvia Plath. In the meantime, I did provide a summary of this letter in the preamble to the Appendix in the Faber paperback edition of The Letters of Sylvia Plath, Volume II (2019).
All links accessed 1 February 2020 and 14 June 2022.